on February 03, 2022
Back again to travel the world through my little kitchen and this time we've gone to Nepal to attempt one of their most famous dishes; Momo (dumplings).
These little parcels of loveliness actually translate to mean "steamed bun" from the Jin Chinese language but made their way over to the Kathmandu Valley region of Nepal as early as the 15th century! Traditionally the momos would have been made with yak meat or any filling food the creator had to hand, due to the scarcity of vegetables where they lived in the mountains, but as other cultures through Nepal discovered momo's alternate version, including vegetarian momos were born.
The dumplings are a much-treasured dish of Nepal, Tibet, and vast parts of India, they're usually eaten as a side with soups and stews, served hot, and are often made in large portions to eat as a family or group.
I made a video for this one as I'd hoped to show you how to shape the momos and steam them...but as lovely as my camera angle was I stupidly wasn't able to capture it, I'll re-create them at some point, but for now, I'll just have to explain it well in the recipe!
Ingredients
Makes 20 small OR 8-10 Large
Dough:
200g Plain Flour
5 tsp Oil (I used sunflower oil)
Filling:
140g Vegan Mince
ALL FINELY CHOPPED/MINCED
3 Garlic Cloves
1/2 Red Onion
1 Spring Onion
2 Green Chillies
1 tsp Tumeric
1 tsp Garam Masala
2 tbsp Melted Butter
Broth:
500ml Vegetable Stock
1 portion of Noodles (I used egg noodles)
4-5 Mushrooms, sliced
1 Spring Onion, sliced
A handful of Spinach
Method
1. Pour the flour and oil into a bowl and mix together until you have a lumpy, stretchy dough. Put a tea towel over the bowl and leave to rest while you prepare the momo filling.
2. Tip all the momo ingredients into a bowl, season with salt and pepper then combine (ideally with your hands) to make a well-incorporated mix, rest the filling for 15 mins.
3. Divide the momo dough into 4 balls, then one at a time roll each ball out with a rolling pin on a very well-floured surface until it's around the thickness of a penny - it needs to be thin to get that lovely translucent texture and not go hard in the steamer but it can't be too thin otherwise the filling with rip the dough.
4. Using a 3"-6" inch cookie cutter, cut out circles of dough, I then re-rolled each piece of dough until I couldn't cut circles out of it anymore, I'm not sure if that's the right thing to do but I didn't want to waste dough. Leave the dough circles on a floured baking sheet, you should have 20 in total.
5. Now for the fun bit! Taking 3-4 momos at a time, put 1 tsp of filling in each, using your fingertip, wet the edges a little with water (it helps with sealing) then using a pushing and crimping method seal the filling inside. I had watched a few videos online for this and although I stupidly didn't get the right angle to show you; you gently lift a bit of pastry, push your finger in so the dough curves around your finger, then bring up the next piece of dough so it folds and moulds to the little indent you made. Continue this all the way around until you have a little parcel, make sure to leave a small hole at the top for the air to escape! Continue with the rest of your momo dough until you have around 20 little parcels.
6. Fill a large saucepan with boiling water, place your steamer on top, brush the inside of the steamer with a little oil to stop the momos from sticking.
7. Place a few momos into the steamer, they should be about an inch apart, cover with a lid and allow them to steam for 10-12 mins until they look translucent and soft. Continue with all your momos, leaving the cooked ones aside where they'll stay warm.
8. Whilst the momos cook, we can make the final element; the broth! Pour your veg stock and all the ingredients into a small saucepan, turn on medium heat and allow this to cook for 10-15 mins until it's simmering, the mushrooms are soft and the spinach has wilted. 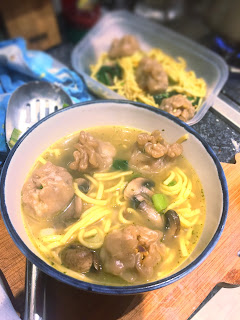 What do you think?! I was so surprised that I didn't fully fail on what seemed to be a pretty complex dish! Although my parcel-making skills need some work, I think it was a solid first attempt. It's a brilliant dish for a weekend (or day-off) dinner, and even though it might take over an hour to put together, I think once you get quicker at making the momos this could take less than 45 mins.
I loved every second of the process even if the size of them was much smaller than I envisioned and I didn't get the sealing of the momos quite right, I think I've done a pretty good job and I hope it might give you a little bit of confidence to maybe try this or something similar. I think dumplings can look VERY difficult, and although some more intricate designs are difficult, let's not forget these were made just to hold a filling to sit on the side of a dish...they're not as big and scary as they look!
It's your choice to eat the momos on their own, dunk them in the broth like I did, or you can research the peanut/satay chutney that is traditionally eaten with these and make yourself some of that!
However you choose to enjoy these delicious Nepalese Momos, I hope you have fun learning something new!
My next post will be another update to our wedding plans...and it's a big one!
H x
Asia Dinner Food Homemade Lunch Vegetarian Winter World Series