on March 03, 2022
I'm so excited to share this book review with you, I know it's another James Patterson, and hardly surprising that I really enjoyed it but this one is an extra special book that I enjoyed more than most, and it now leads me on to share some exciting news at the end of the review!
Hide & seek is not your average James Patterson crime/thriller, this one reminded me more of Stephen King's 'Rose Madder' as it followed the life of an underappreciated, talented female songwriter who after being abused for years by her (now deceased) ex-husband hopes to find a new life in New York with her daughter, finally pursuing the life and love she's always wanted. 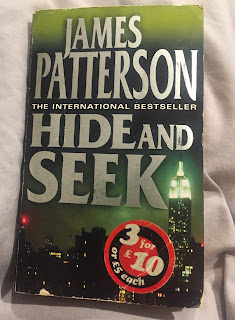 Maggie Bradford is an exceptional songwriter with an honest voice, she knows her brilliant songs stem from the terrible luck that she has in her private life; her first husband turned out to abuse her in every way possible until she finally got up the courage to grab a gun and face him, her second husband was the love of her life; patient, kind and loving but when he tragically dies on a boating trip she's left to turn to Will Shephard, the charming football star who has an obsession with power, control, and women, and is able to hide it all very well behind a confident facade and bags of cash...but is Will too charismatic to be true?
After Maggie is put on trial for murder, it quickly becomes the most talked-about trial on the planet, she is attacked from all angles, some saying she's a black widow, others saying it's a terrible run of bad luck in a star's life, others saying she is guilty but it's all in self-defense of the terrible partner's she's picked over the years, and all the while Maggie can do nothing but sit in her cell and mull over the demons that tried to best her over the years.
I LOVED this book. Plain and simple, it had me hooked from the first page to the last and that is the absolute truth. I really fell for Maggie and the fact that she wanted her cozy dream life of a big house, doting husband, and loving children but also wanted the opportunity to share her songwriting gift with the world which only surrounded her with unsavoury characters. Trying to balance both those dreams and keep herself safe around men who are only out to take advantage of her and her family was fascinating to read and watch unfold.
There was, of course, the classic "evil villain" character of Will Shephard that only James Patterson could twist from his mind. This man is pure danger and not in a fun way, he sets out to do harm, destroy others for amusement and then successfully hide it all with his power and influence. When the two forces of Maggie and Will clash, it set the book off on a huge journey where I was reading over 100 pages a day just because I couldn't leave it!
The book had everything I wanted in a brilliant Patterson novel; crime, love, lust, danger, violence, and the ability to keep you guessing, whether you're a seasoned Patterson fan or this will be your first venture into his world I strongly suggest you scour the charity shops and second-hand book websites to find this one because you won't regret it!
***TW***
Once again, James Patterson's books cover a lot of difficult subjects that might not be suitable for some to read. There is talk of physical, emotional, and sexual violence, some of that aimed towards children and minors. As well as descriptions of weapons such as knives and guns.
If you're interested in James Patterson novels, Hide & Seek was published in 1997 and was one of the unusual stand-alone novels he wrote before creating the various series' he is famous for now and if like me, you like to read books from an author in order of when they were published you'll be looking for the precursor to this (which I haven't read yet) called ' Jack and Jill' this classic novel from the Alex Cross Series follows Alex trying to track down two notorious killers who are murdering America's rich and famous and have their eyes set on The Leader of The Free World!! If you're looking for the book after 'Hide & Seek' then you'll be looking for 'Miracle on 17th Green' (another one I've not read) that was co-written with Peter de Jonge and follows the life of a depressed middle-aged man who suddenly becomes a pro-golfer and witnesses a miracle during the most important play of his life.
So as you can see there's plenty to read if you're looking for it! But, my main exciting news is that my partner treated me to a very special live stream for my birthday, James Patterson and Dolly Parton (...I know, THE Dolly Parton) speaking about the new book they co-wrote together called 'Run Rose Run' about a shining country singer trying to escape her deadly past. I'm so excited to watch this live stream on the 10th March at 6.30pm, it was £25 which included the live stream code and the book which will be sent out after the stream.
I've never watched an author speaking about their work before and especially not one that I've admired for so long who has now brought out this crazy co-write with Dolly Parton! Obviously, I'll tell you all how it goes and write a full review when the book arrives!
In my next post, we'll be trying out another World Series recipe!
H x
Book Review Books Crime Sustainable Buying Thriller