on March 11, 2022
Back on another review of my James Patterson binge and this time it's The Beach House co-written with Peter de Jonge. Although this wasn't my favourite Patterson so far, it was definitely a rapid page-turner and filled with so much deceit and eventual justice (...sort of) that you just had to keep reading.
The Beach House, published in 2002 follows the sordid life of Peter Mullen, a happy-go-lucky guy who has a pretty sweet job being a valet to New York's rich and famous during house parties in The Hamptons, but when Peter is found dead on the private beach of an elite family, his death opens a can of worms everyone thought they could keep hidden. 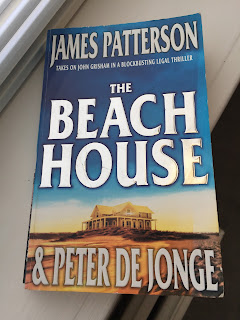 Peter's death ignites a fire in his brother (and hot-shot lawyer) Jack Mullen, to uncover all the dark secrecy and betrayal that's been plaguing The Hampton's community for decades. As much as the local police try and blame Peter's death on drowning, Jack knows there's much more to it than that and that the police may be trying to cover up their own mistakes before it's too late.
Jack must face his own demons as well as use his close group of friends and a trusted lawbook to stage his own investigation into both his brother's suspicious finances and his eventual death as well as obviously finding out who murdered Peter Mullen?!
I really enjoyed this book, it was fast-paced without being difficult to keep up with, there was so much suspense between Jack Mullen and this host of unsavoury characters who keep trying to shut down each lead Jack comes across, there is lying, deceit, romance, betrayal, honesty, and justice seamlessly weaving its way through the pages, taking you on a huge journey that dumps you at the end of this great plotline, amongst a group of characters that you never suspected would have been linked in such a disturbing way.
As I mentioned at the start, it's not my favourite James Patterson and although there's nothing inherently wrong with it, there are just better James Patterson novels I would choose over this one, but the co-write with de Jonge makes for really interesting reading as these two different writing styles come together over such a huge plot. I found this book on a charity donation bookshelf and picked it up for 20p but if you don't have one of those at any local supermarkets, I have also seen it in a used condition online for around £3.50 with free delivery if you prefer to get your books online.
***TW***
I always have to be open and honest about James Patterson's books as they usually do contain some really disturbing storylines. This one is actually a very heavy one and obviously features lots of descriptions of murder, beatings, bodily violence and death by drowning. But later on, the book does touch on many different types of abuse from emotional and physical, financial as well as quite a large segment on child sexual abuse so just be aware of those topics if you're sensitive to them!
If you liked the sound of The Beach House, the next book released after that was 2nd Chance, the second book in the brilliant Women's Murder Club series, I have read one book so far from this series but it wasn't this one. 2nd Chance centres around the search for a wicked killer who lures his victims in with promises of danger and excitement before ending their lives. Talented reporter Cindy Thomas works alongside Assistant DA Jill Bernhardt who both begin to suspect their killer is an ex-policeman which makes his methods and motive all the more worrying!
...sounds like another good one! We'll all have to keep our eyes peeled for it.
My next post will be an update on our wedding plans, I can't wait to tell you what we've ticked off the list this time!
H x
Book Review Books Charity Shop Buys Crime Eco Friendly Thriller