on March 23, 2022
Sorry for the huge break in blog posts over the last few days, I haven't really got much of an excuse, I've just been working a lot of different hours and I fell out of routine, but we're back and I apologise.
I've got a real cracker of a book to tell you about today! This is one of the best James Patterson books I've read in a long time and it was totally unexpected, so I hope I can explain it well enough that you'll want to read it too.
7th Heaven is the seventh installment in the Women's Murder Club series, published in 2008 and co-written by Patterson and Maxine Paetro. I honestly didn't know what to expect but I liked the idea of the series that followed a group of four close-knit women that all worked in and around the criminal and justice systems of San Francisco, and often meet up for what looks like a girly catch-up at the local bar, but really, they're working together to solve some of the toughest murder cases in the U.S.
7th Heaven follows Detective Lindsay Boxer as she tries to solve a horrific chain of murders, each one linked by a terrible house fire that kills everyone inside. The suspects seem to be 2 people who have a hatred of the rich and successful, so they pose as innocent people; friends of the family, repairmen, and so on, before luring their victims into a false sense of security, torturing and eventually killing them. The suspects aren't completely unknown, as each neighbour is able to give a description of two older teenage boys that seem to show up at each location before the murders, and the boys then leave a cryptic message in Latin scribbled into a nearby book at each crime scene. But their final act is yet unknown to Lindsay Boxer...the boys want to make one final hit against one of the most successful people around, State Senator Campion and his wealthy family.
At the same time, The Campions are dealing with terrifying mysteries of their own, their son, Michael Campion has gone missing, ever studious in education and a friend to all, Michael is also known to suffer from a very serious congenital heart disease that was supposed to have killed him as a young child, with Michael missing (feared murdered) and his family in bits about his safety and physical wellbeing, they call upon Lindsay Boxer to find him before he's gone forever. 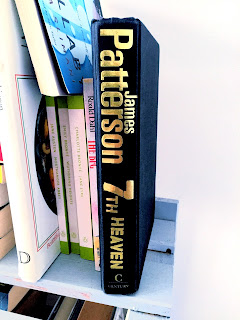 The search takes Lindsay deep into the minds of the housefire murderers Pidge and Hawk, as well as unraveling a secret that the last place Michael Campion may have been seen, was exiting the house of a known prostitute.
Obviously, this is a huge shock to Campion's parents, but when they discover the real truth from the prostitute herself; Junie Moon, the family is left more heartbroken than they started.
I could go on and on with the storyline but it takes so many twists and turns that I don't want to say too much of anything and spoil something else so I'll leave the synopsis there. But what I can say is that this is the best James Patterson book that I've read in a while and getting that different perspective from a co-write with Paetro made it all the better, as you were able to see these two storytellers' styles combine to create this really intricate, layered book that although might seem a bit confusing with at least two separate storylines, kept rolling quite well throughout.
But what really got me was the HUGE twist at the end, I know most books try and throw you off with an exciting ending but this was like nothing I'd ever read before. I always relay the stories to my partner as I'm reading them and even he was genuinely surprised when I told him the ending. Obviously, I'll say nothing more on that but it's got to do with Michael Campion and nothing like you're thinking right now.
***TW***
As usual, I'll lay out some of the more difficult subjects crossed in the book, so you're aware before going into it or buying for someone else. Obviously, the first part of the book centers around these housefires so there's constant talk of fire, destruction to homes as well as descriptions of death by fire and torture. Later on, as you meet other characters there is in-depth talk of injuries and causes of death on cadavers from a forensics character. There are also references to violence towards women both physical and sexual as well as references towards large weapons like butcher's knives. And finally (I think) there are also descriptions of disposing of bodies in quite gruesome ways.
I don't want to frighten anybody off from reading the book, this book is pure fiction and not based on any real cases but I understand some people are uncomfortable around these subjects as they may be/have been real cases for them so I'm just giving you a heads-up!
I hope I've made that exciting enough for you to take an interest in. I found the book on a donation bookshelf at my local supermarket and only paid 20p for it, so take a look around your local charity shops and I'm almost certain you'll find at least one James Patterson book, they seem to pop up everywhere! If not, I have seen the book online in a used condition for just over £3, so you don't have to pay full price on a brand new print when there are plenty of perfect used copies waiting for you!
If you've already read 7th Heaven or just want a taste of what's next, the next book in the series (that I haven't even read yet!) is called The 8th Confession and is about the "perfect" murder of San Fransico's most celebrated couple, and of course, it's up to Lindsay Boxer to track down this "perfect" murderer.
My final words on this post are...if you only ever pick up one James Patterson book, it should be 7th Heaven.
H x
Book Review Books Charity Shop Buys Crime Spring Thriller