on March 30, 2022
I'm trying out another vegan cheese from the brilliant Vegan Cheese Making Kit my best friend Shannon gave to me for my birthday. If you didn't see the first post you can click here or you can go to my Instagram page to watch the video where I opened the kit and explained what's inside!
This time we're going to attempt vegan mascarpone and use it to make a beautifully cheesy veggie lasagne. But I have to share some truths that I tried very hard to find a vegan sauce to use in the lasagne, which I found very easily, then without a second thought bought Quorn Mince because it was the cheapest available, but of course, Quorn Mince has egg whites in it, so it's not vegan! I was really annoyed at myself when I realised but I'm being honest here so you don't make the same mistake (I'm not vegan, just vegetarian, but any new vegans ALWAYS check the ingredient list), so the mascarpone and sauce that I used in the lasagne are vegan but obviously, the mince isn't, just so you're aware.
Anyway, on the with the dish! This was my first time making a lasagne of any kind, but I thought making this thick and creamy mascarpone would work perfectly inside a lasagne. I just went for it and layered down some lasagne sheets, used my mixed veggie tomato sauce as the base, added the mascarpone then spread the mince, spinach, and some sliced mushroom on top. I repeated this for a second storey then topped it off with three more lasagne sheets and the last of the sauce and cheese! Although it wasn't the perfectly neat tower I had envisioned, it did look tasty!
I made a video of the process and although I won't be sharing the method or exact ingredients to make the mascarpone as I don't want to step on any toes with the Vegan Cheese Making Kit people, I will share full ingredients and a method for the actual lasagne, let's go!
Ingredients
Serves 4
1 tsp Olive Oil
1 Onion, diced
2 Cloves of Garlic, diced
Salt & Pepper
1 tbsp Oregano
300g Vegan Mince
500g Vegan Mixed Vegetable Pasta Sauce
Vegan Mascarpone (use ingredient list and method provided from the kit)
2 Handfuls of raw Spinach
5 small Mushrooms, sliced
1. Prepare the mascarpone according to the kit recipe then set it aside.  Preheat the oven to 180C/ 160 Fan/ Gas Mark 4.
2. In a frying pan add the oil and onion on low heat, let this fry for around 5 mins until the onion is soft and translucent.
3. Add in the garlic, mince, and oregano. The mince will need around 10 mins to cook but as it's going in the oven with the lasagne just browning it and combining it with the onion, garlic, and oregano for 7-10 mins will be fine. Then add salt and pepper to taste.
4. In a high-sided tray, lay 3-4 lasagne sheets next to each other to cover the bottom. Add 1/3 of the pasta sauce and mascarpone, then layer over half the mince, spinach, and mushrooms, make sure everything is evenly spread across each lasagne sheet.
5. Repeat this with another layer of each and spread evenly.
6. Top the lasagne with 3 more pasta sheets, the leftover pasta sauce and mascarpone then put in the oven to cook for 35-40 mins on the middle shelf. I checked it around 20 mins in and saw the cheese had melted well with a good colour so I covered the lasagne with foil to stop it colouring too much.
7. Remove from the oven and serve with chips, salad or any of your favourite sides! 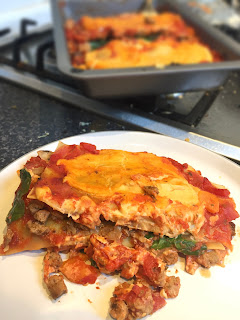 Yet again, I'm amazed by this vegan cheese-making kit, not only because it's allowing me to create tasty vegan cheese in such a simple way, but it's so quick as well! The actual process of making the cheese takes less than 30 mins and it could be even quicker if you soak the nuts you need for the mascarpone in cold water overnight, so they're soft for the next day.
Although the lasagne isn't the prettiest to look at, it was so tasty and I made enough for one main meal for me and two lunches, so there's plenty to go around. I think my recipe for the lasagne needs some tweaking and I will continue to make it and work on it until it's good enough for me, but until then this recipe is simple enough for anybody looking to make a very quick and fuss-free dinner or meal-prep some lunches for the week.
As I mentioned at the start, the only thing that wasn't vegan (annoyingly) was the mince, so as long as you get vegan mincemeat then this meal will be 100% vegan!
I'm still loving the vegan cheese kit and I really look forward to coming up with all these different dishes to show it off to you, next time I think I'm going to make some vegan halloumi, but in the next post, I'll be sharing another monthly favourites because we'll already be in April!
See you then,
H x
Dinner Easy Recipe Food Homemade Lunch Quick Recipe Spring Vegan Vegetarian