Back with another world series recipe and this time I'm attempting a beautiful gingerbread-type cake called Piernik from Poland!

I decided not to bury my head in the sand and come out and speak to you all before we start. I'm beyond upset, angry, and fearful for the people of Ukraine, I never expected Putin to actually stick to his word and I can only hope someone from his inner team has the good sense to do what needs to be done and end the needless bloodshed.
I am fully in support of the innocent civilians and soldiers of Ukraine and their families who are trapped fighting a war none of them should have to contend with, I do also feel for the Russian people who side with Ukraine and the rest of the world and want nothing more than their dictator leader to end his losing battle and those legitimate Russian businesses losing precious income because of the global sanctions, I can only hope you side with justice and force your leader to abandon his attack on an innocent independent country.
I had spoken to my partner about doing a world series recipe on Ukraine, making one of their most famous/favourite dishes just as a show of support and to say that we're keeping the country and its people in our thoughts and more importantly, having open and honest discussions in the hopes that world leaders are doing the same.
But, I'm worried doing a recipe will come across as insincere or like I'm trying to stand up for a country at war by making some food, but I'm sure you know that's not what I'm trying to do it's just I express myself through writing and food so...I think that's all I can do! If any of you are really for or against the idea of a Ukraine World Series post then please leave a comment and let me know because the last thing I want to do is upset, anger, or embarrass Ukrainians at this painful time.
But for now, we'll carry on with this World Series recipe and our Polish Piernik!
Piernik has existed in Poland since the 12th century and is traditionally made around Christmas time due to the use of honey, ginger, cloves, and other warming winter spices within the cake but nowadays people (like me) make it whenever they get the urge because not only is it delicious it's very simple to pull together too. The name of this cake comes from the old Polish "pierna" which translates to "spices", I actually looked it up online to make sure it translates properly and the modern Polish word "pierna" has a much...spicier meaning that I thought it would, so I'm just gonna leave that part there, haha!
Piernik despite its gingerbread look traditionally doesn't use ginger and most recipes opt for cloves or all-spice in place of ginger for a more savoury, almost peppery taste, but I'm beginning to realise I don't really like allspice so I used all the more traditional spices and added a dash of ginger in for some extra spicy flavour. As I mentioned before, Piernik is usually eaten around Christmas and with its chocolate glaze and gold sprinkles on top, it's definitely one to share with family or those that you love.
I made a video for this one to show you how simple it is to bring it all together, but I'll leave the full ingredients and recipe down below, I hope you enjoy it!
Ingredients
Serves 6-8
Cake Batter:
120g Butter, softened
2 tbsp Plum Butter/ Jam
100g Light Soft Brown Sugar
5 tbsp Honey
2 tbsp Cocoa Powder
260g Self Raising Flour
2 tsp Ginger
2 tsp Cinnamon
1/2 tsp Cloves
1/2 tsp Nutmeg
1/4 tsp Salt
2 Eggs, beaten
150ml Milk
Filling:
2-3 tbsp Plum Butter/ Jam
Glaze:
120g Dark Chocolate
180ml Double Cream
3 tbsp Honey
2 tbsp Plum Butter/ Jam
Gold Sprinkles/ Edible Gold Dust for topping
1. To start with, preheat the oven to 160C/ 140 Fan/ Gas Mark 4 and grease 2 circular cake tins, you can use a loaf tin if you want but I wanted a little filling of the plum butter in the middle, so it's up to you!
2. Put honey, jam, sugar and butter into a small saucepan and heat on VERY LOW until melted and combined into a jam-like consistency then leave to cool for around 15 mins.
3. Combine cocoa powder, flour, all the spices and salt in a large mixing bowl.
4. Whisk eggs and milk into the honey/jam saucepan and pour the wet into the dry then whisk together to form a dark, thick cake batter, remember not to overmix, otherwise the cake will be dry! Just combine the ingredients together until there's no dry flour or anything dry left on the sides.
5. Split the batter evenly across the two tins (or pour all of it into a loaf tin), bake in the oven for 55-60 mins until risen and spongy and a toothpick inserted into the centre comes out clean, then set aside to cool for at least 20 mins.
6. Once the cake has cooled, spread your plum butter filling evenly on top of one of the cakes then sandwich the other on top and gently press down, you can also add chopped nuts like walnuts or pecans in the filling as well if you wanted but I chose not to this time.
7. Now for the chocolate glaze! In a small saucepan, melt all the glaze ingredients on low heat until you have a gloopy, pourable consistency. Then take off the heat to cool for around 5 mins.
8. Put the cake on a rack with a deep tray underneath, pour your glaze over the top , making sure it covers the entire cake including the sides, sprinkle your gold decoration on top and leave the cake out for at least 30-45 mins for the glaze to set, then enjoy!! 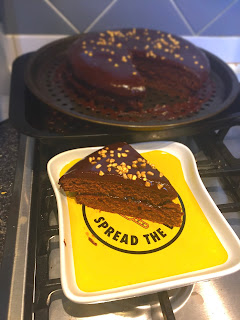 I was SO impressed with this cake and how it turned out. Not only is it absolutely delicious with that dark, spiced flavour that matches perfectly with that tart, dark chocolate glaze, but it's also so simple to pull together, even though there are a couple of elements, it's literally just gently melting the ingredients together, there's no real skill involved here, just patience!
And to top it all off, I think it looks great too! The gold sprinkles/ dust is a really fun addition and just makes it look that bit more appealing (and festive too!).
I'm so happy I found this Piernik and I can't wait to make it time and again, especially from October onwards when I think it'll make you feel all cosy and seasonal.
I hope you find some time to try out this recipe as I know you'll end up with something amazing that you can enjoy either on your own or with those that you love, and when it comes to pouring melted chocolate, spreading soft jam, and adding cute sprinkles this recipe was made for little bakers too!
Despite this cheery and fun recipe, I do still think of Ukraine pretty much all the time and the excessive hardships they're going through, if you are able to, there are plenty of places like the Red Cross and independent companies that are accepting both monetary and food donations but just keeping the conversations moving and making sure that we don't forget (or get used to!) the fact that this war is really happening and is TOTALLY unacceptable in today's society.
I feel like I've said my piece now and I hope you appreciate how deeply I feel about the victims in this terrible time.
Following on from that, in my next post, I'll be writing about my charity donation choices for this year!
H x
Baking Charity Christmas dessert Easy Recipe Europe Food Seasonal Treats Vegetarian World Series