This is the second to last James Patterson book review I'm gonna do for a while because I've started branching away to other books and authors and I also felt a bit bad that the only book reviews you ever get to read are from the same author, so I'm going to break it up soon with some different reviews, but for now, this book called Alex Cross' Trial published in 2009 is one of the most difficult Patterson's I've ever read but I feel it's so important and told so masterfully that I had to share it with you!

If you've read any of Patterson's Alex Cross Series then you'll know how much of a hero Cross is, but he comes to learn that the Cross family has many heroes dating all the way back to his Great Uncle Abraham who stood as a firm figure within the black community in The Deep South against the Ku Klux Klan. Alex Cross decides it's time to educate his children on Uncle Abraham and tell the story of "The Trial". 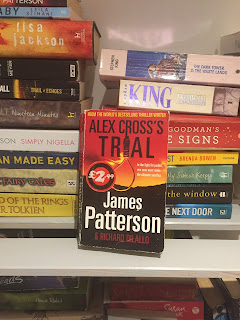 It begins with a white man named Ben Corbett, growing up in a tiny secluded town in The Deep South where Ben witnessed many a racially driven assault/murder, but when his mother had a stroke one hot afternoon in the town square and only a young, black shop assistant was willing to help, did Ben realise that prejudice against someone for the colour of their skin has no place in a just society. As Ben grew up and became a lawyer he took on the most challenging cases where it was always The People V The Black Man/Woman, and Ben looked to change the race-driven blame and help prove these people as innocent of the crimes they didn't commit.

Corbett becomes known as a bit of a local ally among the black community and in a whirlwind of events is asked by Teddy Roosevelt (President at the time) to go on a special mission back to his hometown of Eudora, Mississippi, and investigate the chilling claims of a KKK resurgence.
As Ben enters Eudora he is introduced to a man named Abraham Cross and his granddaughter Moody who takes Ben on a winding journey through some of the worst parts of Eudora and brings him face to face with the evils of the Ku Klux Klan, but as Corbett digs deeper into this cesspool of racism he realises these despicable members of the KKK are not faceless strangers at all.
***TW***
There is a lot to be mindful of in this book, of course, it's important and it raises a lot of ugly truths about the treatment of black people that shouldn't be hidden or dumbed down. But just so you're aware there are obviously large segments of racist language as well as descriptions of multiple lynchings in graphic detail, rape, descriptions of weapons such as guns as well as them being used, as well as segments describing the KKK and how they targeted local communities.
As I said, this book is important and shouldn't be shied away from, but these are the main difficult points so you can decide if it's suitable.
I really enjoyed this book, it was told honestly in such an open and thoughtful way and really tried to bring you into that time and let you see the horrors of racism with no filter. Abraham and Moody are brilliant characters, they have so much charm and wit and really help to tell the story from a different perspective but Ben Corbett is a brilliant character too, for going against the general consensus of the time and actively trying to work with black people to change these backward towns into safe, tolerant neighborhoods for all to live. Although I realise this book is just fiction, it obviously does describe real things that were happening to real families and communities which makes it all the more shocking and upsetting. But, I think everybody should read this book, come down to the evil level of these KKK characters and the other townsfolk that turned a blind eye to see that actions have serious consequences, no matter how insignificant you think they are.
If you can't wait for this book to turn up on a charity bookshelf or car boot table, I've found it in a used condition online for just over £3 and when you plough your way through this book the next one in the series is called I, Alex Cross and was also published in 2009. I, Alex Cross centres around our favourite crime-fighting duo, Alex and Sampson as they race to Virginia to try and solve the most personal murder yet; Alex's niece Caroline.
I'll keep a lookout for I, Alex Cross because it's certainly different from what I thought the storyline would be!
My next post will be an April Monthly Favourites and I've got some big BIG news to share with you all!
H x
Book Review Books Charity Shop Buys Crime Spring Sustainable Buying Thriller