on April 04, 2022
Around mid-February, I and my partner had a little day out to Chislehurst Caves in Kent. This amazing network of caverns with a huge history is very close to us and somewhere we'd had on our list to visit for a while!
We started our journey in the visitors centre, having a look at all the artifacts and history found within the caves, and a quick stop at the cafe as we had almost an hour to kill before our tour (we didn't book in advance so we had to wait for the first available tour, I would recommend pre-booking if you can!), so we had a couple of drinks and some sweet treats and then it was time to enter the caves!
This is the first thing you see at the entrance building to the caves but once you get inside it's a slow decline into the depths and I was already feeling a little skittish. 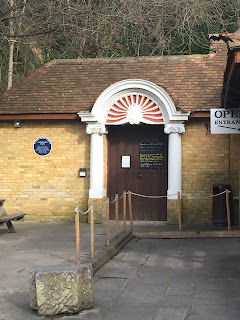 I'll give you a little history of Chislehurst caves before I tell you about our tour. The caves are man-made and began their life in the Victorian era as a mine for collecting lime, materials for bricks to start the building work in central London, and flint to make weaponry during WWI. The caves are almost 40 miles long and contain hundreds of little pockets of darkness as well as huge, wide-open spaces where workmen would have trundled through as they excavated materials. The caves have had many uses including a huge air-raid shelter for over 15,000 people in WWII, and a music venue that hosted Led Zeppelin, Jimi Hendrix, and David Bowie (amongst others) in the '70s. But the caves have now finally settled as a brilliant tourist attraction, secretly nestled in a housing estate 20 mins away by train from central London.
As we walked around the visitors centre they had so much information about the music events that used to go on down there, and as I and my partner are music nerds we were lapping it up! We saw this poster dated New Year's Eve 1957 where the caves were hosting a "Jazz BBQ" with over 20 acts playing, it sounds like an amazing time and a brilliant place to host a New Year's Eve party! 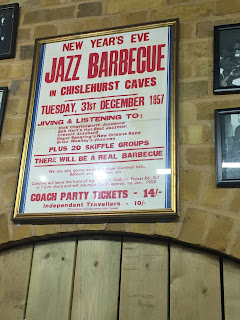 Here are some pictures the visitor's centre has of Led Zeppelin visiting the caves, I used to be obsessed with them around 6 years ago so it was really funny to see they'd traveled all the way to these strange caves in Kent to perform, but then again, Robert Plant (that's the guy in the top-right frame with the long, blonde hair) is pretty mystical himself so it probably makes sense that he was down there. 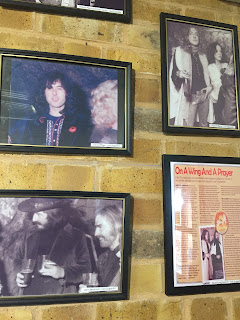 This is a picture of the visitors centre, I know it's not the most glamorous one but it's got a gift shop as well as a cafe and some amazing history in it and of course, the real excitement is right under that floor! 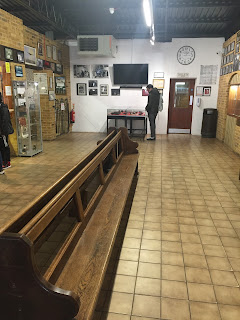 This one is the last picture I got as you aren't allowed to take pictures in the cave, mainly because your eyes adjust very quickly to the pitch black down there, and the guide advised that flashes from phone cameras can be very dangerous to your eyes. So I just snapped this cheeky one without flash before we went in and let me tell you, that little light you can see on the left is pretty much all they have, after that you grab a paraffin lamp and walk through the pitch black! Yes, it is creepy but walking through these amazing caves with your guide and just a handful of paraffin lamps that only give enough light to see the floor makes for an unforgettable experience. 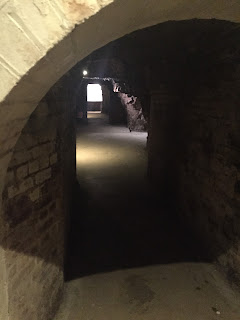