on April 07, 2022
I was really excited to make this World Series recipe as not only was it a challenge, a delicious recipe, and something new I'd never heard of before, but it's also traditionally eaten around Easter! Cozonac is a loaf dessert that is enjoyed across most of Western Europe but is believed to have originated in Ancient Egypt or Greece, where bakers would have used a handful of ingredients like honey, walnuts, and sugar, but that's all changed today! Today's Romanian recipe is quite intricate, uses a lot of ingredients, and takes over 3 hours to prepare and bake.
As I mentioned, Cozonac is a very special recipe in Romania and the surrounding countries, it's made on all special holidays like Christmas, Easter, and New Year's and is served as a large loaf to be sliced and shared with family and friends.
Word of warning, mine is definitely not perfect, but this was my first attempt and I did a lot of research into more traditional recipes to try and incorporate more traditional fillings and methods, so although I will try again in the future, I hope you enjoy this first attempt! 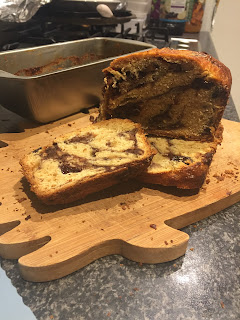 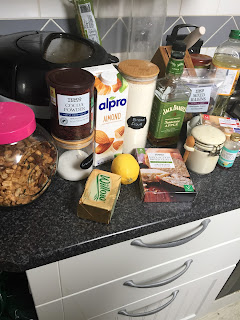 To start with,  put the raisins and 1 tbsp of rum/ whiskey/ bourbon (I used Jack Daniels and I don't really think it's suitable for baking with but that's all I had) into a small bowl or mug and let the raisins soak up the alcohol while you continue the recipe. 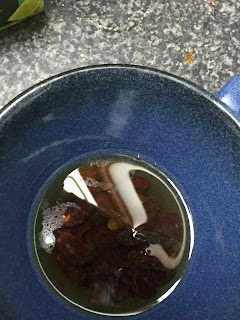 Now onto the yeast starter, gently heat milk up in the microwave until warm but not boiling. Mix yeast and sugar in a small bowl then pour over the milk, stir and let this rest for 12-15 mins until it's a porridge consistency and bubbly. 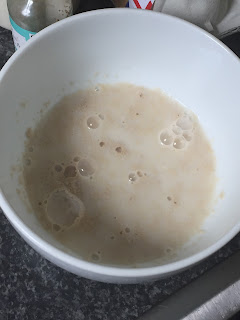 Put a small saucepan on medium heat, and add the milk, sugar, and lemon zest in, gently heating until the sugar dissolves. Add the butter into the pan and stir until the butter has almost melted then take it off the heat and set aside. Allow it to cool slightly but the mixture must be warm when added to the dough! 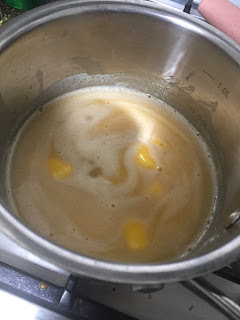 In a mixing bowl add your yeast mix and 130g of flour, and combine into a wet paste. Pour in the warm milk mixture and combine on a slow speed for 2-3 mins until the flour is fully incorporated. Let the mix rest for 5 mins. 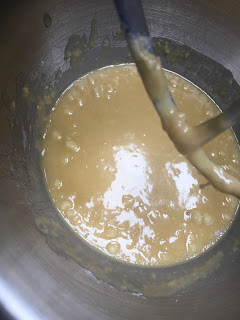 Add the egg yolks to the mixing bowl and mix again on low for another 2-3 mins before adding the vanilla, raisins (drain them first!), and salt. 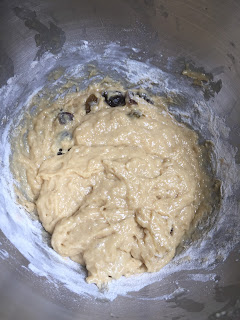 On top of the dough pour half the oil, now, using your hands, knead the oil into the dough, folding the dough over multiple times, but don't tear it! Once the oil has been soaked up, repeat with the last half of the oil. 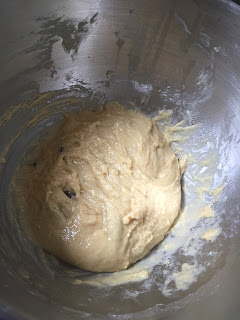 Pour in the rest of the flour with the orange zest and knead for around 5 mins until the dough is smooth and elastic, you can add more flour a tbsp at a time if the dough is still sticky. 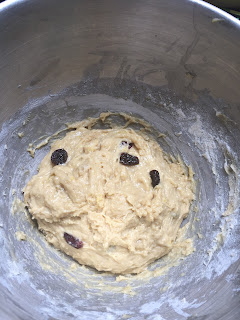 Place the dough in a large, lightly oiled bowl. Turn the dough over in the bowl so it's fully coated in oil then drape a tea towel over the bowl and allow to rise in a warm place for up to 2 hours, or until doubled in size. 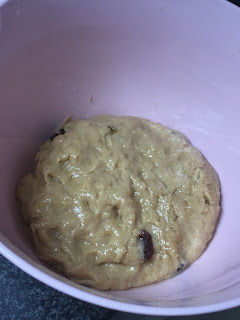 While the dough rises, we'll make the filling! To begin whisk egg whites and salt until frothy. 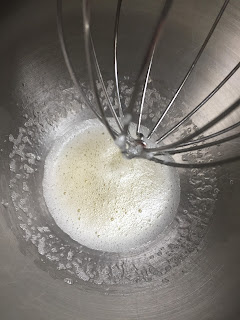 Add the sugar in stages, letting the egg whites absorb and lighten before adding more, you should have medium-firm peaks that can be whipped up. Then gently stir in the cocoa powder (....as you'll see, I wasn't able to whip the egg whites properly so although it still tasted nice, I didn't get the light, airy texture that I was looking for).
Whilst the egg whites whip put all the other ingredients into a food processor/blender and pulse into a thick, grainy paste. 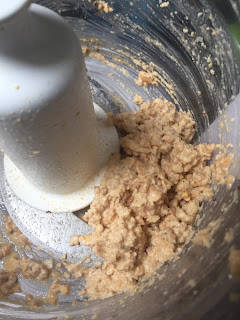 Gently stir the paste into the egg white mixture in stages until fully combined. 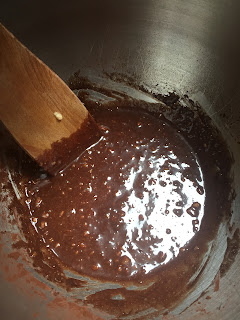 Now for the final part! Grease a loaf tin and set it aside. Take your dough and gently punch it to release the air then divide it into two. One at a time on a lightly oiled surface, roll the dough out into rectangles and spread the filling, leaving around an inch gap on all sides. 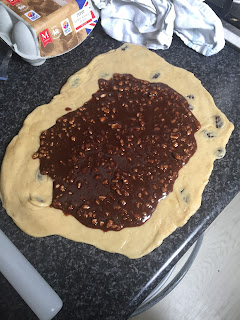 Repeat with the second half of the dough, then roll each rectangle up into a thick log, twist and pinch the ends to seal. 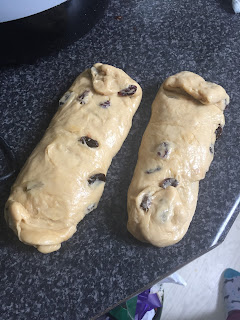 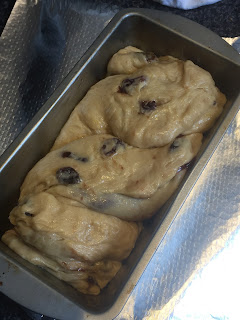 Once risen, combine the milk and egg to make the glaze, then using a pastry brush, glaze the top of the Cozonac, make sure to get in between the braid! Sprinkle sugar on the top of the loaf and let it bake for 45 mins. I put some foil over the top after about 30 mins so it didn't brown any further, if a toothpick inserted into the centre comes out clean, you're done! 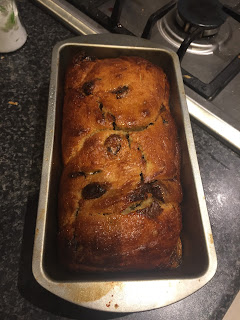 The hardest part is now waiting for it cool before you slice it up and eat it! Although this was a real challenge for me and I decided to do it before I had to go out to work so I was a bit pushed for time, I think it came out ok. I did taste it and although I think it lost some of its flavour because of the denseness of the dough, I could taste the nuts, the cocoa powder, and the boozy raisins but I don't think I added enough citrus zest or juice to really get that citrus punch so I'll have to add more next time. I'm VERY happy with how it looks, it got an amazing colour on it from the glaze and the marbling inside, which I think looks awesome!
As I mentioned near the top, I chose to use Jack Daniels for my raisins as that's all I had in but I don't really think it was suitable as there was no taste of Jack Daniels just a very strong smell coming from the loaf (which I'm not overly keen on), more traditional recipes suggest using dark rum so maybe I'll just do that next time.
I think the main thing I can suggest to you is GIVE YOURSELF TIME, I learnt the hard way that this isn't a recipe to rush or cut corners on, you need the full time to allow the dough to rise properly and soak in all it's flavours, as I mentioned, I would make this again because it seems like a really beautiful and special loaf to make during festive seasons or family get-togethers, so I'll try and perfect it in the future for you!
I know this recipe looks quite daunting with its large ingredient list and long method, but if you've made bread a few times this won't be too difficult, just stick to the recipe and give yourself time, it's fun to challenge yourself every now and then!
In my next post, I'll be re-making iced coffee and updating the recipe just in time for some (hopefully) warmer weather!
H x
Baking dessert Europe Food Spring Vegetarian World Series