on April 21, 2022
We're back with another World Series and this one is a little different. Usually, I focus on making something that can be shared as a group or family, but these delicious little balls of crispy potato and egg originating from Somalia are the perfect solo lunch or snack. In Somalia, Nafaqo literally means "nutrition" and this dish is commonly whipped up at breakfast time due to its simple prep but very filling (and portable) ingredients. Nafaqo can be eaten on its own or alongside a small salad, portion of rice, and some classic Somali chutney for a light but satisfying meal.
I really enjoyed making these and although there is improvement to be made, I've definitely found a dish I genuinely want to eat when I'm feeling a little lazy or tired, or I just want something easy as it's so simple to make! I made a video to go with this one but I'll leave the method down below too.
Ingredients
Serves 2
1 Large Potato, quartered
1 Egg
25g Cornflour
1/4 tsp Tumeric
1/4 tsp Coriander
200g Breadcrumbs
Salt & Pepper
300ml Oil
1. To start, boil water on medium heat then add the potato in and leave to cook for 20 mins, in the last 9 mins gently add the whole egg to the boiling water as well.
2. Once cooked, drain the water, put the egg into cold water, and set aside and leave the potato to cool for 2-3 mins until cool enough to handle.
3. Peel the shell off the egg and cut it in half; if you're making smaller Nafaqo then cut it into quarters.
3. Peel the skin off the potato and then place the potato back into the saucepan with the cornflour and mash to a thick dough, the mash doesn't need to be perfectly soft it's ok to have texture.
5. Once the mash resembles a dough, put it onto a clean surface, split it in half, and form the dough into two flat discs. You may need to put a small amount of oil on your hands to stop the dough from becoming sticky.
6. Place each half of the egg into the center of each disc and fold the potato dough around the egg, gently folding it into a ball and sealing the egg inside.
7. In a bowl, combine turmeric, coriander, breadcrumbs, and salt & pepper into a coating and roll each Nafaqo in the breadcrumb mix, coating it well.
8. Finally, heat the oil up to 180C and carefully place the Nafaqo one at a time into the oil to fry, leave it for 4-5 mins before turning over and repeating until crispy on all sides.
9. Repeat with the other Nafaqo, leave them to drain and cool on a tea towel for 2-3 mins whilst you grab some salad or a side, then enjoy! 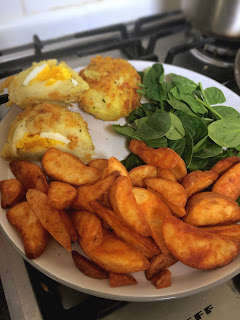 These were so tasty! I know mine weren't quite as crispy as I wanted them to be and I think that's more down to the amount of oil I used, so next time I'll make sure they're fully submerged when frying, but I was so happy with everything else! The potato was lovely and soft inside and that thick, boiled egg was instantly filling. I chose to add some spinach onto the side of my plate just to add some greens, but it was a welcome touch to go with the egg and potato. To me, Nafaqo seems like it's in the "comfort food" segment of meals and it's something you're able to whip up at any time of day or night to give you a really tasty but satisfying meal where you definitely won't go hungry.
I was also really surprised to find a traditional recipe that was vegetarian! But doing a little more research I have seen that in some recipes Somalians will wrap their egg in mincemeat just like the Scotch Egg that we have here, but this potato version is just as tasty and easier to make than getting raw meat involved. I would definitely make these again and hopefully get beautiful crispy Nafaqo that I can enjoy time and time again. If you're looking for an introduction to deep frying or cooking small, simple meals then give Nafaqo a go, I think you'll enjoy it!
In my next post, I'll be talking about my birthday trip to Longleat Zoo, just in time for Earth Day on the 22nd!
H x
Africa Breakfast Easy Recipe Food Lunch Quick Recipe Snacks Spring Vegetarian World Series